Get book discounts and receive D3.js related news and tips.

A data join creates a correspondence between an array of data and a selection of HTML or SVG elements.

Joining an array to HTML/SVG elements means that:

For example, suppose you’ve an array of five numbers which you’d like to join to circle elements:

Each time D3 performs the join it’ll add or remove circle elements so that each array element has a corresponding circle element.

D3 can also update the position and radius of each circle (and any other attributes or style) based on the value of the corresponding array element.

For example, the radius of each circle can be set to half the value of the corresponding array value. This results in the first circle having a radius of 20, the second a radius of 5 and so on:

Prior to version 5 of D3, data joins were not all that easy to learn (you had to learn about enter, exit and update). Fortunately, for versions 5 and up, data joins are much easier!

How to create a data join

The general pattern for creating a data join is:

Typically four methods are used in a data join:

and an svg element containing a g element:

you can join myData to circle elements using:

Running this code results in 5 circles being created:

You can’t see any circles because each radius is zero. However if you inspect and expand the SVG element (right click on the SVG element which has been coloured light pink and select Inspect) you’ll see five circle elements have been added: 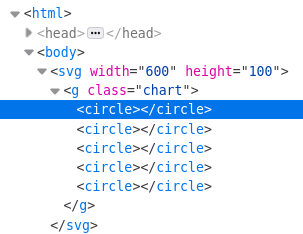 In the CodePen example you can try adding elements to the array and you’ll see that the data join ensures there are as many circles as array elements.

Joined HTML or SVG elements may be updated using the .style, .attr and .text methods that were covered in the selections chapter. (The .join method returns a selection containing all of the joined elements.)

For example you can set the center, radius and colour of every circle using:

You only see one circle because all five circles share the same position and size.

If a function is passed into .attr or .style you can update the HTML/SVG elements in a data-driven manner.

The function is called for each element in the selection. It takes two parameters, typically named d and i.

The return value of the function is used to set the attribute or style value.

Let’s pass a function into the first .attr:

This tells D3 to set each circle’s cx attribute to i * 100. i is the index within the selection, so the first circle will be positioned at 0, the next at 100 and so on:

Now let’s set r according to the joined value:

(The first circle is clipped because it’s cx attribute is zero.)

You can put any amount of logic within the functions that are passed into .attr and .style. For example, let’s colour the circle if its joined value is greater than 30:

The .join method returns a D3 selection, so you can use any of the methods covered in the selections chapter such as .style, .attr, .text and .each

When building data visualisations with D3 you’ll typically be joining arrays of objects (rather than arrays of numbers). For example:

You can join an array of objects in the same manner as before. However, when a function is passed into .attr or .style, the d parameter is an object. This means that you’ll typically reference a property of that object.

Here’s a full example where cities is joined to circle elements:

Each circle is sized according to the city’s population. (Note that it’s better practice to set the area, rather than the radius, of a circle proportionally to a data value.)

You can build a simple bar chart using the above techniques. Instead of joining circle elements, let’s join rect and text elements:

How about that? We’ve just built a simple bar chart using D3!

(This example relies on extra code in index.html and style.css. Open the CodePen example to see the full example.)

If your data array changes you’ll need to perform the join again. (Unlike some frameworks such as Vue.js, D3 doesn’t automatically do this for you.)

Therefore we usually put the join code in a function. Whenever the data changes, we’ll call this function.

I usually name the function update. For example:

We pass the data array into update. Each time update is called the join is performed.

The data doesn’t ever change in the previous example, so let’s add a button that when clicked gets some randomised data and calls update:

getData returns an array containing a random number of random values. A button element has been added to index.html (see the CodePen example). The last two lines add an event handler updateAll to this button. updateAll calls getData and then calls update to perform the join.

Therefore each time the button is clicked, the data updates and the circles update accordingly.

Look at this example where an array ['Z'] is joined to div elements. Each time the button is clicked a new letter is added to the start of the array:

When ‘Insert element’ is clicked a new div element is added to the end of the row. However, the text of each existing div changes, resulting in a rather strange effect.

If a key function is used, each letter will stay joined to the same div element:

In general, if your array elements can change position within the array you should probably use a key function.

When D3 performs a data join it adds an attribute __data__ to each DOM element in the selection and assigns the joined data to it.

We can inspect this in Google Chrome by right clicking on an element, choosing ‘Inspect’ and typing:

in the debug console. ($0 represents the element that’s being inspected.)

Being able to check the joined data in this manner is particularly useful when debugging as it allows us to check whether our data join is behaving as expected.