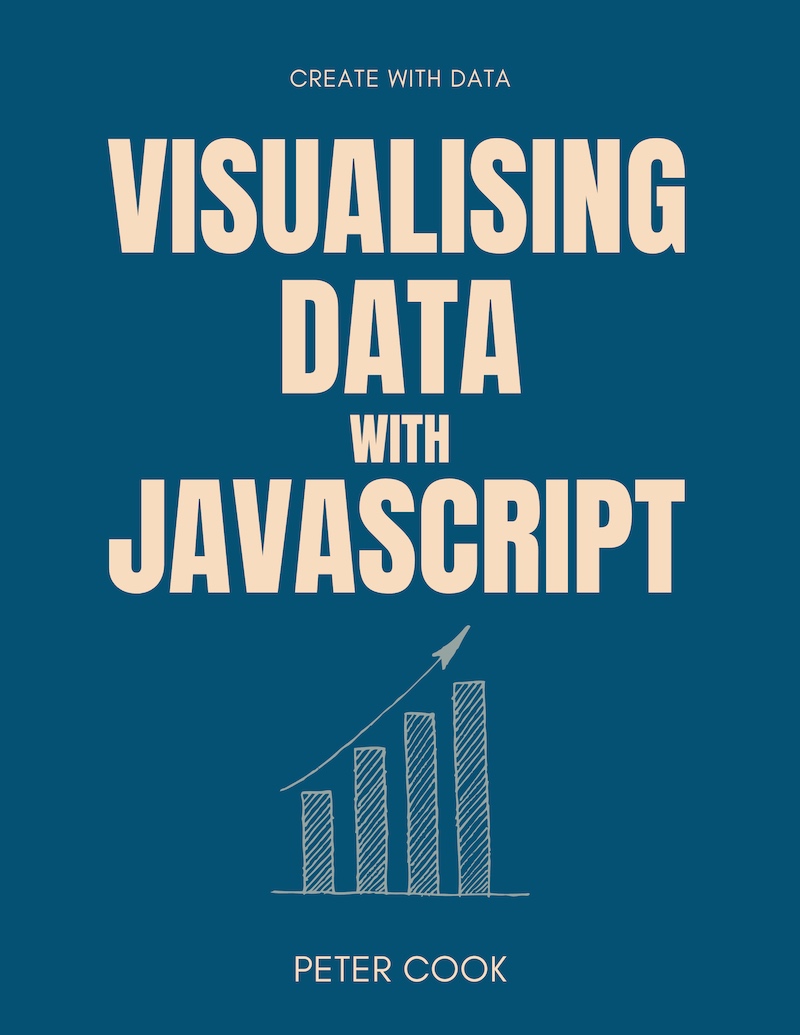 Visualising Data with JavaScript teaches you how to build charts, dashboards and data stories using Chart.js, Leaflet, D3 and React.

Get book discounts and receive D3.js related news and tips.

How to visualise hierarchical data (data in the shape of trees) using D3.js. This article shows how to create a nested (or hierarchical) data structure from an array of data. It also covers visualising hierarchies using D3, including treemaps, circle packing and sunburst charts.

A common technique when analysing or visualising data is to organise your data into groups.

For example, here's some film data:

Let's group it according to Distributor and count the number of films in each group:

You can also group by more than one category. For example let's group by Distributor, then group by Genre:

In the world of spreadsheets, the above table is also known as a pivot table. If you're familiar with databases you can achieve similar affects using the SQL statement GROUP BY.

The data how has a hierachical structure. At the top level are Distributors (Sony Pictures, Walt Disney Pictures etc.) and at the next level are Genres (Action, Adventure, Comedy etc.).

The topmost item (or node) is known as the root node. The bottommost items are known as leaves or leaf nodes. In the leaf nodes of the above example, the count is displayed under the dot.

You can also aggregate (or 'rollup') the groups in different ways. For example you can sum Worldwide_Gross:

There are several ways in which hierarchical data can be visualised including trees, treemaps, packed circles and sunbursts. Each of these can be created using D3 and we'll cover each of them later in this chapter.

First we'll look at how D3 can help us create a hierarchical data structure from flat data.

Creating a hierarchy from an array of data

Given an array of data such as:

you can use D3's .rollup function to group the data by any of the categorical properties.

The above array is similar to the output of d3.csv. (See requests chapter.)

The first argument of .rollup is the array you're wanting to group.

The next argument is a reduce function. This is a function that takes an array of values and outputs a single value. For example it might iterate through the array, summing one of the properties (such as Worldwide_Gross).

The remaining argument(s) are functions which specify which properties to group by.

Let's group by Distributor and Genre and sum Worldwide_Gross across the items in each group:

In the above example d3.rollup groups data by Distributor and Genre. Each of the groups is then passed into sumWorldwideGross which returns the sum of Worldwide_Gross.

You can inspect the map returned by d3.rollup using .get:

The first .get returns the group associated with Sony Pictures. This group contains 3 items: Comedy, Action and Drama. (You can compare this with the table we showed previously.)

The second .get returns the value associated with Drama within the Sony Pictures group (93905424). This returns the value computed by the rollup function (sumWorldwideGross) because we're at the lowest level of the hieararchy.

D3 has a bespoke hierarchy data structure that gives you some useful features over and above the map object seen previously.

It's created by calling d3.hierarchy and passing in the map object generated by d3.rollup:

You can also pass a nested object into d3.hierarchy. The layout examples later on use this approach.

The output of d3.hierarchy is a nested object that looks something like:

It's similar in structure to the map object that's passed into d3.hierarchy. The difference is that it's a regular JavaScript object and has various properties and methods defined on it that provides additional functionality.

Each item (or node) in the hierarchy has properties: data, children, depth, height and parent.

data is the associated item from the map or object that's passed into d3.hierarchy. In this example it's a two-element array containing the group name and the group's value. For leaf nodes (the nodes at the bottom-most level), the value is the aggregated value (for example, the sum of Worldwide_Gross). Otherwise, it's the map representing the items in the group. Typically you won't need to access the value because the hierarchy makes this data available through its children and value properties.

If you're passing the output of d3.rollup into d3.hierarchy, the accessor function will usually return d[1] which is the rolled up value generated by d3.rollup.

Each leaf node will now have a value property equivalent to its rolled up value. For example:

The non-leaf nodes will also have a value property which is the sum of the values of its children.

The .value property generated by the .sum method is used by some of the layouts we'll cover later such as treemap and packed circles.

Each node in a D3 hierarchy has handy methods such as .descendants, .ancestors and .links.

.links returns an array of objects representing the connections between the node and its children, all the way to the leaves. We'll see this in use later on.

There are several ways in which hierarchies can be visualised including trees:

You can also use stacked bar charts for visualising hierarchies!

D3 supports the above visualisations using layout functions. These take a d3.hierarchy structure and add visual variables such as position and size to it.

For example the tree layout adds x and y values to each node such that the nodes form a tree-like shape.

d3.tree() returns a layout function into which you can pass a hierarchy object.

You can configure the tree's size using .size:

You can then call treeLayout, passing in the hierarchy object root that was defined above:

This'll write x and y values on each node of root.

To draw the nodes:

To draw the links:

For simplicity, in this and the following CodePen examples, a hierarchy object is created from a nested object (rather than from an array).

For example, imagine you have country population data where each country has a region and a population value.

You can use a treemap to represent each region as a rectangle. Each region consists of smaller rectangles which represent a country. Each country is sized proportionally to the population: 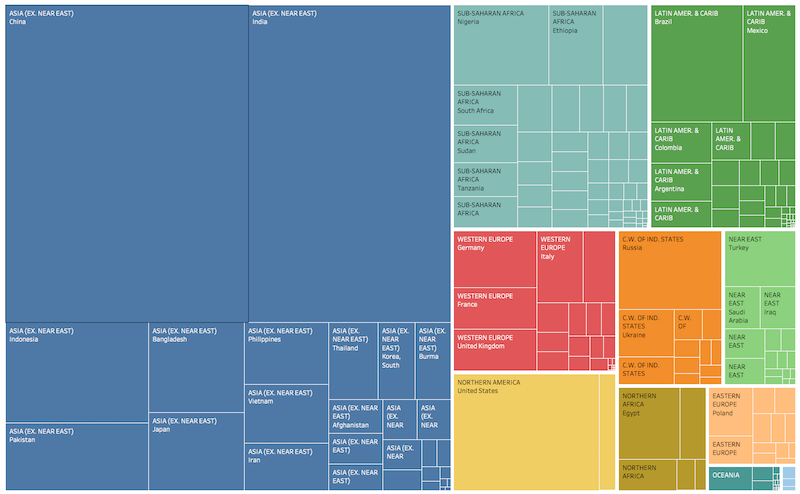 As before you can configure the layout:

Before applying this layout to your hierarchy you must run .sum() on the hierarchy. This traverses the tree and sets .value on each node to be the sum of its children:

Note an accessor function has been passed into .sum() to specify which property to sum.

You can now call treemapLayout, passing in the hierarchy object root that was defined earlier:

The treemap layout function adds 4 properties x0, x1, y0 and y1 to each node which specify the dimensions of each rectangle in the treemap.

Now you can join the nodes to rect elements and update the x, y, width and height properties of each rect:

If you'd like labels in each rectangle you can join g elements to the array and add rect and text elements to each g:

You can select a tiling strategy using the .tile method:

The pack layout is similar to the tree layout but circles are used to represent nodes.

In this example each country is represented by a circle (sized according to population) and the countries are grouped by region. 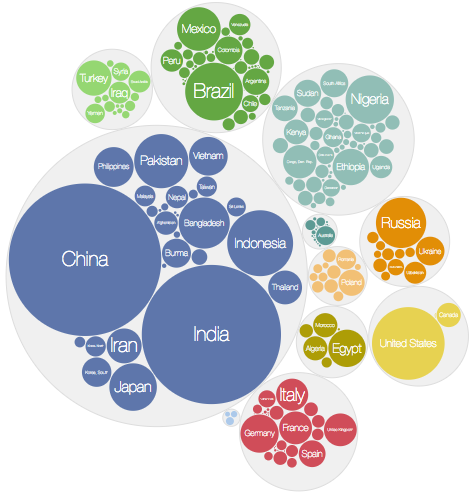 As before you can configure its size by passing an array [width, height] into the .size method:

As with the treemap you must call .sum() on the hierarchy object root before applying the pack layout:

Now you can join circle elements to each descendant of root:

The partition layout subdivides a rectangular space into layers, each of which represents a layer in the hierarchy. Each layer is further subdivided for each node in the layer:

As before you can configure its size by passing an array [width, height] into the .size method:

As with the treemap you must call .sum() on the hierarchy object root and before applying the partition layout:

You can now join rect elements to each descendant of root:

If you'd like to change the orientation of the partition layout so that the layers run left to right you can swap x0 with y0 and x1 with y1 when defining the rect elements:

You can also map the x dimension into a rotation angle and y into a radius to create a sunburst partition:

Visualising Data with JavaScript teaches you how to build charts, dashboards and data stories using Chart.js, Leaflet, D3 and React.